In recent months we have received numerous calls regarding hemlock trees and the emergence of the hemlock woolly adelgid.   To some the name may imply a cute little bug; however I am here to tell you, it’s not.  The woolly adelgid can have devastating effects on your hemlock trees

The hemlock woolly adelgid is a tiny insect which drains water and nutrients from hemlock trees.  Much of Pennsylvania has seen considerable damage to Hemlock trees in forests as well residential properties.

The hemlock woolly adelgid appears in white cottony clusters on the underside of hemlock needles.  These masses of white are normally seen between November and April; and even into the following year; after the insect is dead.  The cottony clusters which you see during this time are the babies; nestled in their protective wax coating. 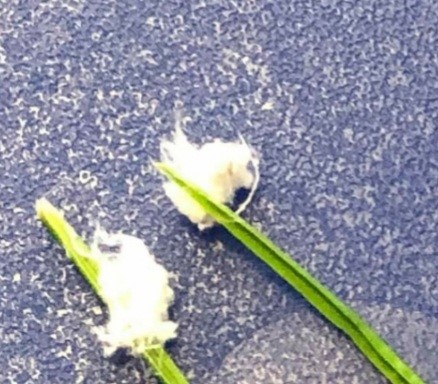 Hemlock Woolly Adelgids can spread from tree to tree via birds, mammals, and even the wind.  It can also spread when firewood is moved or  brought in from an area that was already infected.  Once a tree is infested it has the capability of being killed within three to five years after infestation.

Hemlock Woolly Adelgids have caused  widespread death throughout the Appalachian and southern Catskill mountains; causing considerable ecological damage and loss.  This insect has also been spotted  from George to Main, and even as far north as Nova Scotia.  The cooler temperatures do not seem to present a major obstacle to the insect.

The Beginnings of the Hemlock Woolly Adelgid

Adult females begin to lay eggs in large clusters in late winter, when the weather starts to warm up; and can last throughout spring and into June.  In early April the eggs will begin to hatch. Depending on the springtime temperatures the hatching is finished by late June.

With active feeding they continue to increase in size and like the females before them, they become adults by late September.  Spending the winter on trees as mature females.

In their home environment of Japan, Woolly Adelgids are preyed upon by beetles.  So much so  that they changed how they reproduce; thus ensuring protection of their species.  To save themselves they adapted and began to reproduce bi-annually. 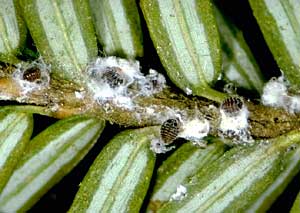 Acting fast, rather than waiting when it comes to treating for the hemlock woolly adelgid, is paramount in getting control of the situation.  A tree and shrub expert can provide you with a couple different treatment options that would best suit your hemlock tree situation.

One option is to have the foliage sprayed with an insecticide or horticultural oil at the right times during the woolly adelgid life cycle.  The other option, is to use a systemic insecticide that moves with the tree sap and is eaten by the adelgids as they feed.

If the coverage is not thorough, or the trees are too tall for the equipment, the surviving woolly adelgids will come back to wreak further havoc upon your hemlocks.

This application is the most effective when the hemlock woolly adelgids (that do not have a waxy protective shell) are active.  The first window of opportunity for treating is after the hatching of the eggs between either March through April or September to October.

There area a couple of different ways that our tree and shrub expert performs a systemic application.

Should I Ask Google?

In the age of DIY, many of us ask Google for information on how to do things.  Whether it be looking for instructions on assembling a dishwasher, to how to make a baked potato.  However, when you get into things like herbicides and insecticides, it’s sometimes best to let an expert handle things.

Tree applications should be undertaken by a tree and shrub expert.  They are educated not only in the best  methods of application, but also which products to use and how to use them correctly.  They also understand the environmental impact both the insect and the products can have on the environment.

Give us a call at LawnRx where our owner and president Bruce Love,  a certified Tree and Shrub expert, will be more than happy to lay out a plan of treatment for your hemlock trees; and the woolly adelgids that are infesting them.